Evolution of sperm morphology in Daphnia within a phyologenetic context

Ellen Decaestecker based on reviews by Renate Matzke-Karasz and 1 anonymous reviewer
A recommendation of: 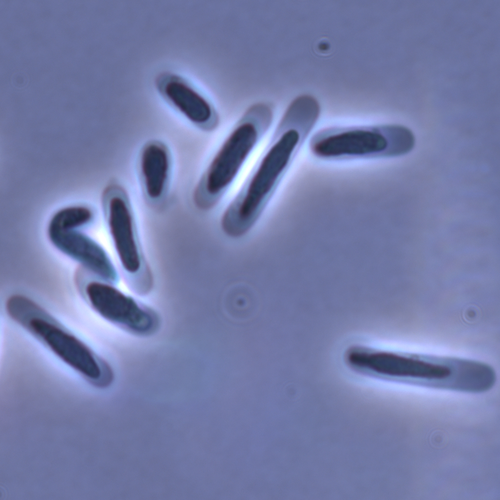 Evolution of sperm morphology in a crustacean genus with fertilization inside an open brood pouch.

Sperm is the most fundamental male reproductive feature. It serves the fertilization of eggs and evolves under sexual selection. Two components of sperm are of particular interest, their number and their morphology. Mode of fertilization is believed to be a key determinant of sperm length across the animal kingdom. External fertilization, unlike internal, favors small and numerous sperm, since sperm density is thinned out in the environment. Here, we study the evolution of sperm morphology in the genus Daphnia, where fertilization occurs in a receptacle, the brood pouch, where sperm can constantly be flushed out by a water current. Based on microscopic observations of sperm morphologies mapped on a phylogeny with 15 Daphnia and 2 outgroup species, we found that despite the internal fertilization mode, Daphnia have among the smallest sperm recorded, as would be expected with external fertilization. Despite being all relatively small compared to other arthropods, sperm length diverged at least twice, once within each of the Daphnia subgenera Ctenodaphnia and Daphnia. Furthermore, species in the latter subgenus also lost the ability of cell compaction by extracellular encapsulation and have very polymorphic sperm with long, and often numerous, filopodia. We discuss the different strategies that Daphnia evolved to achieve fertilization success in the females’ brood pouch.

In this study sperm morphology is studied in 15 Daphnia species and the morphological data are mapped on a Daphnia phylogeny. The authors found that despite the internal fertilization mode, Daphnia have among the smallest sperm recorded, as would be expected with external fertilization. The authors also conclude that increase in sperm length has evolved twice, that sperm encapsulation has been lost in a clade, and that this clade has very polymorphic sperm with long, and often numerous, filopodia.

Daphnia is an interesting model to study sperm morphology because the biology of sexual reproduction is often ignored in (cyclical) parthenogenetic species. Daphnia is part of the very diverse and successful group of cladocerans with cyclical parthenogenetic reproduction. The success of this reproduction mode is reflected in the known 620 species that radiated within this order, this is more than half of the known Branchiopod species diversity and the estimated number of cladoceran species is even two to four times higher (Forró et al. 2008). Looking at this particular model with a good phylogeny and some particularity in the mode of fertilization/reproduction, has thus a large value. Most Daphnia species are cyclical parthenogenetic and switch between sexual and asexual reproduction depending on the environmental conditions. Within the genus Daphnia, evolution to obligate asexuality has evolved in at least four independent occasions by three different mechanisms: (i) obligate parthenogenesis through hybridisation with or without polyploidy, (ii) asexuality has been acquired de novo in some populations and (iii) in certain lineages females reproduce by obligate parthenogenesis, whereas the clonally propagated males produce functional haploid sperm that allows them to breed with sexual females of normal cyclically parthenogenetic lineages (more on this in Decaestecker et al. 2009).

This study is made in the context of a body of research on the evolution of one of the most fundamental and taxonomically diverse cell types. There is surprisingly little known about the adaptive value underlying their morphology because it is very difficult to test this experimentally.  Studying sperm morphology across species is interesting to study evolution itself because it is a "simple trait". As the authors state: The understanding of the adaptive value of sperm morphology, such as length and shape, remains largely incomplete (Lüpold & Pitnick, 2018). Based on phylogenetic analyses across the animal kingdom, the general rule seems to be that fertilization mode (i.e. whether eggs are fertilized within or outside the female) is a key predictor of sperm length (Kahrl et al., 2021). There is a trade-off between sperm number and length (Immler et al., 2011). This study reports on one of the smallest sperm recorded despite the fertilization being internal. The brood pouch in Daphnia is an interesting particularity as fertilisation occurs internally, but it is not disconnected from the environment. It is also remarkable that there are two independent evolution lines of sperm size in this group. It suggests that those traits have an adaptive value.

Cite this recommendation as:
Ellen Decaestecker (2022) Evolution of sperm morphology in Daphnia within a phyologenetic context. Peer Community in Evolutionary Biology, 100145. https://doi.org/10.24072/pci.evolbiol.100145
Conflict of interest:
The recommender in charge of the evaluation of the article and the reviewers declared that they have no conflict of interest (as defined in the code of conduct of PCI) with the authors or with the content of the article. The authors declared that they comply with the PCI rule of having no financial conflicts of interest in relation to the content of the article.

Dear Dr. Duneau, Dr. Moest, and Dr. Ebert, Dear David, Markus, and Dieter, I accepted to do the review process for the recommendation of your preprint on "The evolution of sperm morphology in Daphnia". While I do think this is a valuable study that could recieve recommendation by the PCI Evol. Biol. community, you will see in the review comments below that there are still some substantial changes needed before the publication can be recommended. Could you revise the preprint accordingly and send a revised version and rebuttal letter how you addressed the comments of the anonymous reviewer and Dr. Renate Matzke? Kind regards, Ellen -- prof. dr. Ellen Decaestecker Science, Engineering & Technology Group KU Leuven, Aquatic Biology E. Sabbelaan 53, 8500 Kortrijk www.kuleuven-kulak.be/aquaticbiology/EllenDecaestecker

In this study, Duneau and colleagues investigate sperm morphology in 15 Daphnia species and map the morphological data on a Daphnia phylogeny. They conclude that increase in sperm length has evolved twice, and that sperm encapsulation has been lost in a clade. Globally, this article is based on few data (measures of sperm length in 15 species), statistical analyses (to support the authors’ conclusions) are absent and the discussion is mainly speculative.

The authors also hypothesize that the ancestral state in Daphnia is small sperm. I question whether this hypothesis is meaningful for different reasons: 1) Assuming that small sperm is ancestral is almost as parsimonious as the opposite (based on the phylogeny presented in figure 1). 2) Sperm length in Ceriodaphnia (used as an outgroup in the phylogeny) ranges from 2 to 6 um (these values are mentioned in the text, line 106, but are unfortunately not shown on the phylogeny). Therefore, sperm length in Ceriodaphnia is more or less intermediate between the clades with small sperm and a clade with large sperm (the Daphnia sensus lato clade). It is therefore difficult to conclude whether the ancestral state is small or large sperm length. 3) Sperm length in Daphnia is much smaller than in other taxa (figure 2 from the review of Lupold and Pitnick 2019, https://doi.org/10.1530/REP-17-0536). Hence, it is likely that selection has favored a reduction in sperm length in the Daphnia group.

I also find that most of the discussion is speculative (too far from the results obtained), the authors make many hypotheses to explain the different sperm morphology in Daphnia. The discussion should be more focused on the results obtained. In addition, the authors do not discuss an important result: the fact that sperm length is extremely small in Daphnia in comparison to all other animals (see data from Lupold and Pitnick, 2019).

I am not familiar with the Daphnia taxonomy. I don’t know what is the Daphnia sensu lato clade and the Ctenodaphnia clade (mentioned in the abstract and in the text).

Ceriodaphnia sperm length should be included in figure 1.

Lines 25 and 120: Ejaculate size is imprecise. Do you mean sperm number? Or the volume of the ejaculate?

How many males per species were measured? How many sperm were measured per ejaculate? This should be included in the methods. This is relevant because in another article (https://doi.org/10.1101/2020.02.05.935148, Figure 6B), Duneau et al evidence large inter-individual variation in sperm length in D. magna.

Male genital papilla drawings from published keys are shown on figure 1, and the reader has to wait until lines 146-149 (discussion) to understand why the authors have included these images. This part could be better integrated in the manuscript.

Line 37: It is unclear in this sentence what is triggered by a change in environmental conditions.

The association between the presence/absence of a sperm capsule and the way males were induced (naturally, or artificially through the addition of methyl farnesoate) is almost perfect. Could it be possible that sperm morphology is affected by the male induction process? Or that male maturity differs between naturally and artificially produced males?