Towards an improved understanding of molecular evolution: the relative roles of selection, drift, and everything in between

Molecular evolution through the joint lens of genomic and population processes.

In their perspective article, F Pouyet and KJ Gilbert (2020), propose an interesting overview of all the processes that sculpt patterns of molecular evolution. This well documented article covers most (if not all) important facets of the recurrent debate that has marked the history of molecular evolution: the relative importance of natural selection and neutral processes (i.e. genetic drift). I particularly enjoyed reading this review, that instead of taking a clear position on the debate, catalogs patiently every pieces of information that can help understand how patterns we observed at the genome level, can be understood from a selectionnist point of view, from a neutralist one, and, to quote their title, from "everything in between". The review covers the classical objects of interest in population genetics (genetic drift, selection, demography and structure) but also describes several genomic processes (meiotic drive, linked selection, gene conversion and mutation processes) that obscure the interpretation of these population processes. The interplay between all these processes is very complex (to say the least) and have resulted in many cases in profound confusions while analyzing data. It is always very hard to fully acknowledge our ignorance and we have many times payed the price of model misspecifications. This review has the grand merit to improve our awareness in many directions. Being able to cover so many aspects of a wide topic, while expressing them simply and clearly, connecting concepts and observations from distant fields, is an amazing "tour de force". I believe this article constitutes an excellent up-to-date introduction to the questions and problems at stake in the field of molecular evolution and will certainly also help established researchers by providing them a stimulating overview supported with many relevant references.

[1] Pouyet F, Gilbert KJ (2020) Towards an improved understanding of molecular evolution: the relative roles of selection, drift, and everything in between. arXiv:1909.11490 [q-bio]. ver. 4 peer-reviewed and recommended by PCI Evolutionary Biology. url:https://arxiv.org/abs/1909.11490

Separate the wheat from the chaff: genomic analysis of local adaptation in the red coral Corallium rubrum

The preprint by Pratlong et al. [1] is a well thought quest for genomic regions involved in local adaptation to depth in a species a red coral living the Mediterranean Sea. It first describes a pattern of structuration and then attempts to find candidate genes involved in local adaptation by contrasting deep with shallow populations. Although the pattern of structuration is clear and meaningful, the candidate genomic regions involved in local adaptation remain to be confirmed. Two external reviewers and myself found this preprint particularly interesting regarding the right-mindedness of the authors in front of the difficulties they encounter during their experiments. The discussions on the pros and cons of the approach are very sound and can be easily exported to a large number of studies that hunt for local adaptation. In this sense, the lessons one can learn by reading this well documented manuscript are certainly valuable for a wide range of evolutionary biologists.
More precisely, the authors RAD-sequenced 6 pairs of 'shallow vs deep' samples located in 3 geographical sea areas (Banyuls, Corsica and Marseilles). They were hoping to detect genes involved in the adaptation to depth, if there were any. They start by assessing the patterns of structuration of the 6 samples using PCA and AMOVA [2] and also applied the STRUCTURE [3] assignment software. They show clearly that the samples were mostly differentiated between geographical areas and that only 1 out the 3 areas shows a pattern of isolation by depth (i.e. Marseille). They nevertheless went on and scanned for variants that are highly differentiated in the deep samples when compared to the shallow paired samples in Marseilles, using an Fst outliers approach [4] implemented in the BayeScEnv software [5]. No clear functional signal was in the end detected among the highly differentiated SNPs, leaving a list of candidates begging for complementary data.
The scan for local adaptation using signatures of highly divergent regions is a classical problem of population genetics. It has been applied on many species with various degrees of success. This study is a beautiful example of a well-designed study that did not give full satisfactory answers. Readers will especially appreciate the honesty and the in-depth discussions of the authors while exposing their results and their conclusions step by step. 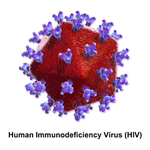 Is convergence an evidence for positive selection?

The preprint by Bertels et al. [1] reports an interesting application of the well-accepted idea that positively selected traits (here variants) can appear several times independently; think about the textbook examples of flight capacity. Hence, the authors assume that reciprocally convergence implies positive selection. The methodology becomes then, in principle, straightforward as one can simply count variants in independent datasets to detect convergent mutations.
In this preprint, the authors have applied this counting strategy on 95 available sequence alignments of the env gene of HIV-1 [2,3] that corresponds to samples taken in different patients during the early phase of infection, at the very beginning of the onset of the immune system. They have compared the number and nature of the convergent mutations to a "neutral" model that assumes (a) a uniform distribution of mutations and (b) a substitution matrix estimated from the data. They show that there is an excess of convergent mutations when compared to the “neutral” expectations, especially for mutations that have arisen in 4+ patients. They also show that the gp41 gene is enriched in these convergent mutations. The authors then discuss in length the potential artifacts that could have given rise to the observed pattern.
I think that this preprint is remarkable in the proposed methodology. Samples are taken in different individuals, whose viral populations were founded by a single particle. Thus, there is no need for phylogenetic reconstruction of ancestral states that is the typical first step of trait convergent analyses. It simply becomes counting variants. This simple counting procedure needs nonetheless to be compared to a “neutral” expectation (a reference model), which includes the mutational process. In this article, the poor predictions of a specifically designed reference model is interpreted as an evidence for positive selection.
Whether the few mutations that are convergent in 4-7 samples out of 95 were selected or not is hard to assess with certainty. The authors have provided good evidence that they are, but only experimental validations will strengthen the claim. Nonetheless, beyond a definitive clue to the implication of selection on these particular mutations, I found the methodological strategy and the discussions on the potential biases highly stimulating. This article is an excellent starting point for further methodological developments that could be then followed by large-scale analyses of convergence in many different organisms and case studies.