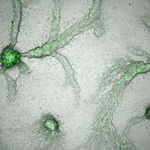 Social Conflicts in Dictyostelium discoideum : A Matter of Scales

The cell-level perspective in social conflicts in Dictyostelium discoideum

The social amoeba Dictyostelium discoideum is an important model system for the study of cooperation and multicellularity as is has both unicellular and aggregative life phases. In the aggregative phase, which typically occurs when nutrients are limiting, individual cells eventually gather together to form a fruiting bodies whose spores may be dispersed to another, better, location and whose stalk cells, which support the spores, die. This extreme form of cooperation has been the focus of numerous studies that have revealed the importance genetic relatedness and kin selection (Hamilton 1964; Lehmann and Rousset 2014) in explaining the maintenance of this cooperative collective behavior (Strassmann et al. 2000; Kuzdzal-Fick et al. 2011; Strassmann and Queller 2011). However, much remains unknown with respect to how the interactions between individual cells, their neighbors, and their environment produce cooperative behavior at the scale of whole groups or collectives. In this preprint, Forget et al. (2021) describe how the D. discoideum system is crucial in this respect because it allows these cellular-level interactions to be studied in a systematic and tractable manner.
Spore bias, which is the tendency of a particular genotype or strain to disproportionately migrate to the spore instead of the stalk, is often used to define which strains are "cheaters" (positive spore bias) and which are "cooperative" (negative spore bias). Forget et al. (2021) note that spore bias depends on a number of stochastic factors including external drivers such as variation in environmental (or nutrient) quality and internal drivers like cell-cycle phase at the time of starvation. Spore bias is also affected by the social environment where the fraction of cheater strains in a spore may be limited by the ability of the remaining stalk cells to support the spore. The social environment can also affect cells through their differential responsiveness to the chemical factors that induce differentiation into stalk cells; responsiveness is partly a function of nutrient quality (Thompson and Kay 2000), which in turn can be a function of cell density. Thus, Forget et al. (2021) highlight a number of mechanisms that could generate frequency-dependent selection that would lead to the stable maintenance of multiple strains with different spore biases; in other words, both cheater and cooperative strains might stably coexist due to these cellular-level interactions.
The cellular-level interactions that Forget et al. (2021) highlight are particularly important because they pose a challenge evolutionary theory: some evolutionary models of social and collective behavior neglect or simplify these interactions. For example, Forget et al. (2021) note that the developmental, behavior, and environmental timescales relevant for Dictyostelium fruiting body formation all overlap. Evolutionary analyses often assume some of these timescales, for example developmental and behavior, are separate in order to simplify the analysis of any interactions. Thus, new theoretical work that allows these timescales to overlap may shed light on how cellular-level interactions can produce environmental, physiological, and behavioral feedbacks that drive the evolution of cooperation and other collective behaviors.