Effect of sex chromosomes on mammalian behaviour: a case study in pygmy mice

Gabriel Marais and Trine Bilde based on reviews by Marion Anne-Lise Picard, Caroline Hu and 1 anonymous reviewer
A recommendation of: 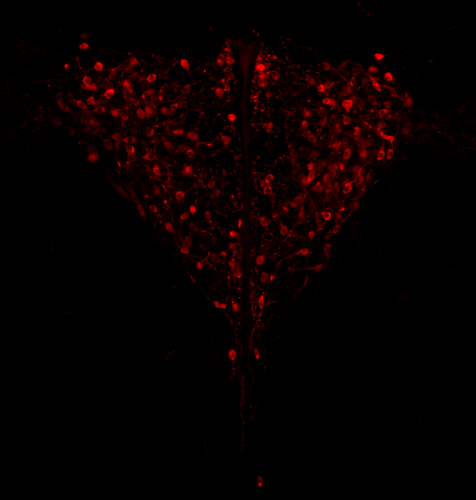 Sexually dimorphic behaviours, such as parental care, have long been thought to be driven mostly, if not exclusively, by gonadal hormones. In the past two decades, a few studies have challenged this view, highlighting the direct influence of the sex chromosome complement (XX vs XY or ZZ vs ZW). The African pygmy mouse, Mus minutoides, is a wild mouse species with naturally occurring XY sex reversal induced by a third, feminizing X* chromosome, leading to three female genotypes: XX, XX* and X*Y. Here, we show that sex reversal in X*Y females shapes a divergent maternal care strategy from both XX and XX* females, rather than altering care quality. In addition, we show that sex reversal may also impact the dopaminergic system in the anteroventral periventricular nucleus of the hypothalamus, consistent with one component of maternal care: pup retrieval. Combining behavioural ecology and neurobiology in a rodent subject to natural selection, we evaluate potential candidates for the neural basis of maternal behaviours and strengthen the underestimated role of the sex chromosomes in shaping sex differences in brain and behaviours. All things considered, we further highlight the emergence of a third sexual phenotype, challenging the binary view of phenotypic sexes.

In mammals, it is well documented that sexual dimorphism and in particular sex differences in behaviour are fine-tuned by gonadal hormonal profiles. For example, in lemurs, where female social dominance is common, the level of testosterone in females is unusually high compared to that of other primate females (Petty and Drea 2015).

Recent studies however suggest that gonadal hormones might not be the only biological factor involved in establishing sexual dimorphism, sex chromosomes might also play a role. The four core genotype (FCG) model and other similar systems allowing to decouple phenotypic and genotypic sex in mice have provided very convincing evidence of such a role (Gatewood et al. 2006; Arnold and Chen 2009; Arnold 2020a, 2020b). This however is a new field of research and the role of sex chromosomes in establishing sexually dimorphic behaviours has not been studied very much yet. Moreover, the FCG model has some limits. Sry, the male determinant gene on the mammalian Y chromosome might be involved in some sex differences in neuroanatomy, but Sry is always associated with maleness in the FCG model, and this potential role of Sry cannot be studied using this system.

Heitzmann et al. have used a natural system to approach these questions. They worked on the African Pygmy mouse, Mus minutoides, in which a modified X chromosome called X* can feminize X*Y individuals, which offers a great opportunity for elegant experiments on the effects of sex chromosomes versus hormones on behaviour. They focused on maternal care and compared pup retrieval, nest quality, and mother-pup interactions in XX, X*X and X*Y females. They found that X*Y females are significantly better at retrieving pups than other females. They are also much more aggressive towards the fathers than other females, preventing paternal care. They build nests of poorer quality but have similar interactions with pups compared to other females. Importantly, no significant differences were found between XX and X*X females for these traits, which points to an effect of the Y chromosome in explaining the differences between X*Y and other females (XX, X*X). Also, another work from the same group showed similar gonadal hormone levels in all the females (Veyrunes et al. 2022).

Heitzmann et al. made a number of predictions based on what is known about the neuroanatomy of rodents which might explain such behaviours. Using cytology, they looked for differences in neuron numbers in the hypothalamus involved in the oxytocin, vasopressin and dopaminergic pathways in XX, X*X and X*Y females, but could not find any significant effects. However, this part of their work relied on very small sample sizes and they used virgin females instead of mothers for ethical reasons, which greatly limited the analysis.

Interestingly, X*Y females have a higher reproductive performance than XX and X*X ones, which compensate for the cost of producing unviable YY embryos and certainly contribute to maintaining a high frequency of X* in many African pygmy mice populations (Saunders et al. 2014, 2022). X*Y females are probably solitary mothers contrary to other females, and Heitzmann et al. have uncovered a divergent female strategy in this species. Their work points out the role of sex chromosomes in establishing sex differences in behaviours.

Cite this recommendation as:
Gabriel Marais and Trine Bilde (2022) Effect of sex chromosomes on mammalian behaviour: a case study in pygmy mice. Peer Community in Evolutionary Biology, 100152. https://doi.org/10.24072/pci.evolbiol.100152
Conflict of interest:
The recommender in charge of the evaluation of the article and the reviewers declared that they have no conflict of interest (as defined in the code of conduct of PCI) with the authors or with the content of the article.

We posted the final version on the preprint server

The referees were positive about the revised ms but all asked for some minor changes. Could you please revise your ms accordingly, and we will be happy to recommend your preprint.

Overall I think this preprint has reached a quality level suitable for recommendation. The authors have made significant changes to the manuscript that improved it in the following ways:

Figure 1 – The two boxed texts “1 - Candidate neural…” and “2 - Predictions…” would serve better as “headers” for the upper and lower half of the figure if they were placed more towards the top-left or top-center. If you “read” the figure like you would text (left to right, top to bottom), these headers are a bit buried.

Figure 3 – I suggest moving the Mus atlas image and the “c” label to the left of the PVN images.

This new version of the manuscript from L. Heitzmann et al. fulfill my previous suggestions :

Particularly, they have added a new Figure 1 that very well describes the investigated neural circuits, and clarifies their predictions. It greatly improves the comprehension!

The authors did not retain the idea of comparing left side vs right side of the hypothalamus, but this suggestion was not mandatory, as it does not affect the conclusions of their paper.

The authors improved the readability of Figure 2 and completed the caption of Fig. S6.

All typos were corrected.

Version of the preprint: 1

Three referees have seen your preprint and made a number of comments/suggestions, which we think will help you improve it.

Could you please submit a revised version and a rebuttal adressing all referees' comments (see PCI Evol Biol guidelines)?

In particular:
- I agree with referee 3 that clear predictions about the different experiments should be provided in the introduction
- Following one comment of referee 3 (about discussion), I think showing a working model (figure?) of the effects of sex chromosomes on the studied phenotypes (with potential specific roles of XCI escapees - see referees 2 and 3, etc...) would be useful
- I found referee 1 suggestion on analysing separately data from right and left parts of hypothalamus interesting, please consider it.

# SUMMARY OF THE MANUSCRIPT:

In this study, L. Heitzmann et al. investigate the role of the sex chromosome complement on maternal care, by combining behavioural and neurobiological aspects. The studied model, Mus minutoides, is characterized by three distinct female genotypes: XX, XX* and X*Y, all occurring naturally. Males are XY. This allow them not only to disentangle the role of gonadal hormone (phenotypic sex) vs sex chromosomes (genotypic sex); but also to discuss their results in the light of natural selection.

First, they performed an exhaustive behavioural assay, with a high number of replicates (from 75 to 105 females), and described as main results:
(i) higher pup retrieval efficiency in X*Y females,
(ii) no change in mother-pup interactions,
(iv) poor nest quality in X*Y females,
(v) no biparental care in X*Y females that are highly aggressive towards males.

They conclude that the sex chromosome complement shapes sexually dimorphic behaviours, and that different combinations of sex chromosomes lead to alternative parental care strategies (more than the two expected under the sole effect of gonadal hormones). By providing the first description of the brain structure for the four genotypes of this species, they also open new perspectives for the study of the neural bases of such behaviours.

That manuscript is straightforward and well written. It is attracting for a wide audience interested in reproductive biology, ranging from parental care, to the role of sex chromosomes in shaping phenotypic differences between sexes. I recommend it for three main reasons: 1. First, they shuffle the long standing thought that gonadal hormones are the main driver of sexually dimorphic behaviors; 2. their model, characterized by naturally occuring sex reversal, is original and relevant; 3. they propose complementary approaches.

1. The only important concern I could have is that their model do not allow them to perform the neurobiology assays on mothers, but on virgin females instead. Nonetheless, they adequately discuss this limitation (l390-l406) and their arguments are valuables. Even if I understand the reasoning behind the formulation "the neural basis of maternal behaviours", they maybe could find an alternative which better reflects the "potentiality"?

2. Sup.Fig. S5-S10: Why not comparing the "oxytocin neurons distribution" (S6) in the same way as vasopressin neurons (S5)? (It seems that at least that the regions #1 and #5 are also characterised by a tendancy for lower number of oxytocin neurons, aren't they?)

Besides, did the autor studied the distribution of cell on left vs right side??
Indeed, there are growing evidences that the hypothalamus is functionally lateralized (Kiss et al. Brain Science, 2020 for review : https://www.ncbi.nlm.nih.gov/pmc/articles/PMC7349050/). Such analysis may allow them to refine the signal?

3. Finally, did the authors previously assessed the level of gonadal hormones in the different female genotypes? Are they similar?

# VERY MINOR SUGGESTIONS:
-Fig2 : make slightly bigger panels A & B ?
-Even if it is well explained in the text, maybe the authors could had a small chart of the studied neural circuit?