Reconciling the upsides and downsides of migration for evolutionary rescue

Claudia Bank based on reviews by 3 anonymous reviewers
A recommendation of: 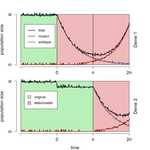 The evolutionary response of populations to changing or novel environments is a topic that unites the interests of evolutionary biologists, ecologists, and biomedical researchers [1]. A prominent phenomenon in this research area is evolutionary rescue, whereby a population that is otherwise doomed to extinction survives due to the spread of new or pre-existing mutations that are beneficial in the new environment. Scenarios of evolutionary rescue require a specific set of parameters: the absolute growth rate has to be negative before the rescue mechanism spreads, upon which the growth rate becomes positive. However, potential examples of its relevance exist (e.g., [2]). From a theoretical point of view, the technical challenge but also the beauty of evolutionary rescue models is that they combine the study of population dynamics (i.e., changes in the size of populations) and population genetics (i.e., changes in the frequencies in the population). Together, the potential relevance of evolutionary rescue in nature and the models' theoretical appeal has resulted in a suite of modeling studies on the subject in recent years.
In this manuscript [3], Tomasini and Peischl address a question that has been contentiously discussed in the literature: when does migration favor evolutionary rescue? They expand on past work (specifically, [4, 5]) by studying the influence of the interaction of the speed and severity of environmental change and the amount of dispersal on the probability of evolutionary rescue. They develop simple analytical results (complemented by simulations) for a haploid one-locus model of two populations connected by gene flow, where both populations deteriorate successively such that evolutionary rescue is required for the metapopulation to survive. For example, the authors derive a simple analytical condition demonstrating that migration between the subpopulations favors evolutionary rescue if environmental change occurs slowly across the two populations (which leaves time for the second population to serve as an immigration source), if the new environment is very harsh and/or if rescue mutations are strongly beneficial in the new environment. The latter conditions ensure that the rescue mutations can spread easily in the new environment without much competition with immigrating, maladapted, genotypes. This result is intuitive and connects between traditional single and multiple-deme models.
Altogether, Tomasini and Peischl present an extensive theoretical study and address also the effect of various tweaks to the model assumptions, such as asymmetries in gene flow and/or carrying capacities, and the effects of different density regulation and local growth rates. They successfully made an effort to explain and interpret their results for a general audience, such that also non-theoreticians should not be afraid to take a look at this manuscript.

Cite this recommendation as:
Claudia Bank (2020) Reconciling the upsides and downsides of migration for evolutionary rescue. Peer Community in Evolutionary Biology, 100098. 10.24072/pci.evolbiol.100098

Version of the preprint: v2

we thank you and the reviewers for your work. All points were addressed according to the suggestions that we received, and we fixed some wrong references between the main text and the supplemental material. In particular, we would like to give more details to two of the points raised by the reviewer:

We believe that writing "when does migration favor rescue?" would not be specific enough as not all rates of migration favor rescue. Because of gene swamping, very high migration hinders evolutionary rescue (in particular when we limit ourselves to mild to lethal mutations in the old environment). The condition that we calculate is then sufficient to say that intermediate gene flow (and only intermediate, not gene flow in general) facilitates evolutionary rescue - when compared to the case with no gene flow. We tried to clarify this in lines 273-274.

Finally, we also uploaded the scripts used to perform the simulations on GitHub (https://github.com/mtomasini/EvolutionaryRescue) and added a mention of this in the text (lines 213-215).

Thank you very much for thoroughly addressing the reviewer comments. In the second round of review, only few minor comments from one of the reviewers remain, which I believe can be addressed straightforwardly. In addition, I found a few typos while reading the revised version of the paper, which I list below. I will be happy to provide the official recommendations once the remaining comments are addressed.
Best regards,
Claudia

Additional requirements of the managing board:
As indicated in the 'How does it work?’ section and in the code of conduct, please make sure that:
-Details on quantitative analyses (e.g., data treatment and statistical scripts in R, bioinformatic pipeline scripts, etc.) and details concerning simulations (scripts, codes) are available to readers in the text, as appendices, or through an open data repository, such as Zenodo, Dryad or some other institutional repository. The scripts or codes must be carefully described so that they can be reused.
==> It looks like the code of the stochastic simulations is not available. Could you post it in an open repository? Thanks

The authors have addressed my concerns.

The full reply to reviewers and the text with tracked changes can be found in the uploaded PDF file.

Thank you very much for your patience during this review process. I have obtained 3 detailed reviews of your manuscript, which have confirmed my positive opinion about your manuscript. Before I officially recommend your manuscript I would like to see your response to these reviews. Specifically, I believe that the manuscript will profit from clarifications of various points that confused the reviewers (or made them curious about the intuition behind the results), and a better placement in the context of the existing literature. Regarding additional work, I support the reviewers' interest in additional results & visualizations, especially regarding the regime of the intermediate migration rate maximizing rescue, and the limits of the analytical approximations, which I believe would improve the quality of the presented manuscript. Other suggestions may be beyond the scope of this manuscript. I leave it up to the authors to decide which recommendations are most constructive and yet feasible to include in the revision, and which might be left for future work and/or mentioning in the discussion.

The paper is interesting as it discusses many effects of gene flow on the probability of rescue in a two-deme model. The interpretations are sound and the approximations seem to behave well and capture what is going on. A better illustration of the parameter range where there is an intermediate migration rate maximizing rescue would be required to better evaluate the quality of the approximations. Another point is that all computations are made assuming some fixed values for given mutants. However, to get a realistic picture and prediction on the effect of gene flow, it would require to integrate this over the different possible type of arising mutants in any given situation. The outcome will then entirely depends on the bivariate distribution of selective effects of mutants in the two environments. If there are no mutants that confer a large benefit in the new environment, with little deleterious in the old one, then most mutants will be highly susceptible to swamping (and reciprocally, if there is little trade-off in fitness effects, gene flow will favor rescue). Hence extending this theory to ‘real’ prediction is not as straightforward as the authors explain. The effect of diploidy (and dominance) is also entirely lacking, not even discussed, which is surprising for results supposed to work best in sexual populations.
Specific comments:
l54-89: The description is ambiguous. The text mentions that many results were already obtained then state that this is a key unanswered question. This can be improved by stating what is known and unknown more clearly.
l146 Explain better how these equations are obtained. The paper should be self-sufficient.
l192-200 can you show where is the limit of swamping on figure 1 if the two demes were at carrying capacity but with the two different environments? It would clarify the interpretation that the maximum occurs near the swamping limit.
l204 The positive effect of migration in phase 2 is not clear in the simulations
l225 why are you talking about space? This is a two demes, spatially implicit model. Same comment line415.
l252 right-hand part?
l273 another reason to show swamping limits as explained above, the same comment applies to Fig 4 in the following §.
l285 explain why there is little dependencies of s on swamping.
l286-294: it would be better to show regions of parameter space where Eq12 works versus simulations. Here, two examples are singled out, but this is not really checking the quality of the approximation.
l335-338 Illustrate better the quality of Eq 16 vs simulations. Two examples are not providing a clear idea of the quality of the approximation.
l466 But haploid. Most sexual species are diploid, aren’t they? Dominance plays a very strong role in the conditions of polymorphism. For rescue, there may be the added difficulty that if the mutant beneficial effect (in the new environment) is not dominant enough to rescue as a heterozygote, gene flow may have effects directly on the frequency, beyond the swamping effect.