Bénard et al. (2021) use 3 experiments to disentangle the role of drift versus host factors in the control of within-host Wolbachia growth in Drosophila melanogaster. They use the wMelPop Wolbachia strain in which virulence (fly longevity) and within-host growth correlate positively with copy number in the genomic region Octomom (Chrostek et al., 2013, Chrostek & Teixeira, 2015). Octomom copy number can be used as a marker for different genetic lineages within the wMelPop strain.

In a first experiment, they introgressed and backcrossed this Wolbachia strain into 6 different host genetic backgrounds and show striking differences in within-host symbiont densities which correlate positively with Octomom copy number. This is consistent with host genotype selecting different Wolbachia strains, but also with bottlenecks and drift between generations. To distinguish between these possibilities, they perform 2 further experiments.

A second experiment repeated experiment 1, but this time introgression was into 3 independent lines of the Bolivia and USA Drosophila populations; those that, respectively, exhibited the lowest and highest Wolbachia density and Octomom copy number. In this experiment, growth and Octomom copy number were measured across the 3 lines, for each population, after 1, 13 and 25 generations. Although there were little differences between replicates at generation 1, there were differences at generations 13 and 25 among the replicates of both the Bolivia and USA lines. These results are indicative of parasite control, or drift being responsible for within-host growth rather than host factors.

A third experiment tested whether Wolbachia density and copy number were under host or parasite control. This was done, again using the USA and Bolivia lines, but this time those from the first experiment, several generations following the initial introgression and backcrossing. The newly introgressed lines were again followed for 25 generations. At generation 1, Wolbachia phenotypes resembled those of the donor parasite population and not the recipient host population indicating a possible maternal effect, but a lack of host control over the parasite. Furthermore, Wolbachia densities and Octomom number differed among replicate lines through time for Bolivia populations and from the donor parasite lines for both populations. These differences among replicate lines that share both host and parasite origins suggest that drift and/or maternal effects are responsible for within-host Wolbachia density and Octomom number.

These findings indicate that drift appears to play a role in shaping Wolbachia evolution in this system. Nevertheless, completely ruling out the role of the host or parasite in controlling densities will require further study. The findings of Bénard and coworkers (2021) should stimulate future work on the contribution of drift to the evolution of vertically transmitted parasites. 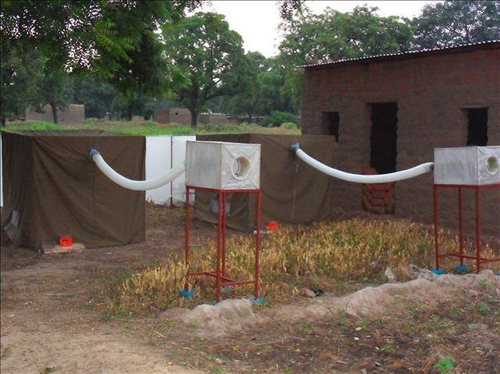 Recommended by Alison Duncan based on reviews by Olivier Restif, Ricardo S. Ramiro and 1 anonymous reviewer

Parasites can manipulate their host’s behaviour to ensure their own transmission. These manipulated behaviours may be outside the range of ordinary host activities [1], or alter the crucial timing and/or location of a host’s regular activity. Vantaux et al show that the latter is true for the human malaria parasite, Plasmodium falciparum [2]. They demonstrate that three species of Anopheles mosquito were 24% more likely to choose human hosts, rather than other vertebrates, for their blood feed when they harboured transmissible stages (sporozoites) compared to when they were uninfected, or infected with non-transmissible malaria parasites [2]. Host choice is crucial for the malaria parasite Plasmodium falciparum to complete its life-cycle, as their host range is much narrower than the mosquito’s for feeding; P. falciparum can only develop in hominids, or closely related apes [3].
The study only shows this stage-dependent parasite manipulation retrospectively (by identifying host type and parasite stage in mosquitoes after their blood feed [2]). There was no difference in the preferences of infectious (with sporozoites) or un-infectious (infected without sporozoites, or uninfected) mosquitoes between human versus cow hosts in a choice test [2]. This suggests that the final decision about whether to feed occurs when the mosquito is in close range of the host.
This, coupled with previous findings, shows that vector manipulation is a fine-tuned business, that can act at multiple stages of the parasite life-cycle and on many behaviours [4]. Indeed, mosquitoes with non-transmissible Plasmodium stages (oocysts) are more reluctant to feed than sporozoite-infected mosquitoes [5] as vectors can be killed by their host whilst feeding, doing so before they are ready to transmit is risky for the malaria parasite. Thus, it seems that Plasmodium is, to some extent, master of its vector; commanding it not to feed when it cannot be transmitted, to feed when it is ready to be transmitted and to feed on the right type of host. What does this mean for our understanding of malaria transmission and epidemics?
Vantaux et al use a mathematical model, parameterised using data from this experiment, to highlight the consequences of this 24% increase in feeding on humans for P. falciparum transmission. They show that this increase raises the number of infectious bites humans receive from 4 (if sporozoite-infected mosquitoes had the same probability as uninfected mosquitoes) to 14 (an increase in 250%), for mosquitoes with a 15-day life-span, at ratios of 1:1 mosquitoes to humans. Longer mosquito life-spans and higher ratios of mosquitoes to humans further increases the number of infectious bites.
These results [2] have important implications for epidemiological forecasting and disease management. Public health strategies could focus on possible ways to trap sporozoite-infected mosquitoes, mimicking cues they use to locate their human hosts, or identify the behaviour of mosquitoes harbouring non-yet infectious Plasmodium, and trap them before they bite. Moreover, the results of the model show that failing to take into account the preference for humans of sporozoite-infected mosquitoes could underestimate the size of pending epidemics.
An important question previously raised is whether Plasmodium-induced alteration in host behaviour really is manipulation, or just a side-effect of being infected [4,5]. The fact that Vantaux et al show that these altered feeding behaviours increases the likelihood of transmission, in that a sporozoite-infected mosquito is more likely to feed on a human, strongly suggests that it is adaptive for the parasite [2]. Ultimately, to show that it is manipulation would require the identification of molecular factors released by Plasmodium that are responsible for physiological changes in the mosquito [6].

As plants cannot run from their enemies, natural selection has favoured the evolution of diverse chemical compounds (phytochemicals) to protect them against herbivores and pathogens. This provides an opportunity for plant feeders to exploit these compounds to combat their own enemies. Indeed, it is widely known that herbivores use such compounds as protection against predators [1]. Recently, this reasoning has been extended to pathogens, and elegant studies have shown that some herbivores feed on phytochemical-containing plants reducing both parasite abundance within hosts [2] and their virulence [3].
Suffering less from parasites is clearly beneficial for infected herbivores. Why then, is this behaviour not fixed in nature? There are, at least, two possible explanations. First, feeding on ‘medicinal’, often toxic, plants may impose costs upon uninfected individuals. Second, parasites may evolve resistance to such chemicals. Whereas the first possibility has been explored, and is taken as evidence for ‘self-medication’ [3], the second hypothesis requires investigation. A recent study by Palmer-Young et al. [4] fills this gap. This article reports evolution of resistance to two different phytochemicals, alone and in combination, in the trypanosome Crithidia bombi, a bumble bee (Bombus impatiens) parasite. To show this, the authors experimentally evolved a strain of C. bombi in the presence of thymol, eugenol or both simultaneously. These phytochemicals are commonly found in the nectar of several plant species, in particular those of the Lamiaceae, a family containing several aromatic herbs. Prior to selection both phytochemicals reduced C. bombi growth by about 50%. However, C. bombi rapidly evolved resistance in both single and the double phytochemical treatments. Moreover, no cost of resistance was detected when evolved parasites were placed in the ancestral, phytochemical-free environment. Therefore, resistance to phytochemicals would be expected to spread rapidly in natural populations of C. bombi. Clearly, thus, the herbivore strategy of sequestering plant secondary chemical compounds as a defence against their pathogens should fail. The question then is ‘why do they still do it’? Can self-medication work in the longer-term for bumblebees?
Well, yes. The very fact that resistance evolved shows that resistance is not fixed in natural C. bombi populations. This is surprising considering that resistance is not costly. This might be due to a number of reasons. Firstly, there may be costs of resistance that were not detected in this experiment. Second, it may not be possible to evolve universal resistance to the heterogeneity present in the phytochemical environment. Indeed, phytochemical environments are highly varied in time and space and bumblebees will visit different plants presenting different phytochemical cocktails throughout the season. Furthermore, migration of bees from populations exposed to different phytochemicals may prevent the fixation of one resistance type.
Or, it may be self-medication behaviour itself that prevents the evolution of resistance? Indeed, in the same way that infected bees seek cooler temperatures to slow growth of a parasitoid fly [5], they may also seek a more varied diet with diverse phytochemicals to which the parasite cannot evolve, but which reduces parasite growth. Further understanding of arthropod self-medication may thus be instrumental to prevent the observed worldwide decline of pollinators [6]. Furthermore, it may inform on mechanisms that prevent rapid evolution of drug resistance in other systems.