The other side of the evolution of heat tolerance: correlated responses in metabolism and life-history traits

Inês Fragata and Pedro Simões based on reviews by Marija Savić Veselinović and 1 anonymous reviewer
A recommendation of: 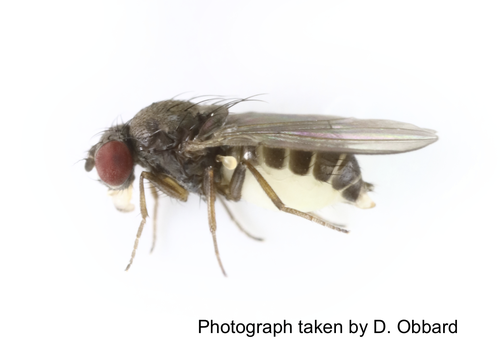 Adaptations to warming conditions exhibited by ectotherms include increasing heat tolerance but also metabolic changes to reduce maintenance costs (metabolic depression), which can allow them to redistribute the energy surplus to biological functions close to fitness. Currently, there is evidence that energy metabolism evolves in response to warming conditions but we know little about how the rate of temperature change during heat stress determines the evolutionary response of metabolism and the consequences on life-history traits. Here, we evaluated the evolutionary response of energy metabolism (metabolic rate and activity of enzymes of the glucose-6-phosphate branchpoint) and life-history traits to artificial selection for increasing heat tolerance in Drosophila subobscura, using two different thermal selection protocols for heat tolerance: slow and fast ramping protocols. We found that the increase in heat thermal tolerance was associated with a reduction of the hexokinase activity in the slow-ramping selected lines, and a slight reduction of the glucose-6-phosphate dehydrogenase activity in the fast-ramping selected lines. We also found that the evolution of increased heat tolerance increased the early fecundity in selected lines and increased the egg-to-adult viability only in the slow-ramping selected lines. However, heat tolerance evolution was not associated with changes in the metabolic rate in selected populations. This work shows heat tolerance can evolve under different thermal scenarios but with different evolutionary outcomes on associated traits depending on the intensity of thermal stress. Therefore, spatial and temporal variability of thermal stress intensity should be taken into account to understand and predict the adaptive response to ongoing and future climatic conditions.

Understanding how species respond to environmental changes is becoming increasingly important in order to predict the future of biodiversity and species distributions under current global warming conditions (Rezende 2020; Bennett et al 2021). Two key factors to take into account in these predictions are the tolerance of organisms to heat stress and subsequently how they adapt to increasingly warmer temperatures. Coupled with this, one important factor that is often overlooked when addressing the evolution of thermal tolerance, is the correlated responses in traits that are important to fitness, such as life histories, behavior and the underlying metabolic processes.

In the present contribution, Mesas and Castañeda (2022) investigate whether the disparity in thermal performance curves observed in the previous experiment (Mesas et al 2021) could be explained by differences in metabolic energy production and consumption, and how this correlated with the reproductive output (fecundity and viability). Overall, the authors show some evidence for lowered enzyme activity and increased performance in life-history traits, particularly for the slow-ramping selected flies. Specifically, the authors observe a reduction in glucose metabolism and increased viability when evolving under slow ramping stress. Interestingly, both regimes show a general increase in fecundity, suggesting that adaptation to these higher temperatures is not costly (for reproduction) in the ancestral environment. The evidence for a somewhat lower metabolism in the slow-ramping lines suggests the evolution of a slow “pace of life”. The “pace of life” concept tries to bridge variation across several levels namely metabolism, physiology, behavior and life history, with low “pace of life” organisms presenting lower metabolic rates, later reproduction and higher longevity than fast “pace of life” organisms (Dammhahn et al 2018, Tuzun & Stocks 2022).  As the authors state there is not a clear-cut association with the expectations of the pace of life hypothesis since there was evidence for increased reproductive output under both selection intensity regimes. This suggests that, given sufficient trait genetic variance, positively correlated responses may emerge during some stages of thermal evolution. As fecundity estimates in this study were focussed on early life, the possibility of a decrease in the cumulative reproductive output of the selected flies, even under benign conditions, cannot be excluded. This would help explain the apparent paradox of increased fecundity in selected lines. In this context, it would also be interesting to explore the variation in reproductive output at different temperatures, i.e to obtain thermal performance curves for life histories.

Mesas and Castañeda (2022) raise important questions to pursue in the future and contribute to the growing evidence that, in order to predict the distribution of ectothermic species under current global warming conditions, we need to expand beyond determining the physiological thermal limits of each organism (Parratt et al 2021). Ultimately, integrating metabolic, life-history and behavioral changes during evolution under different thermal stresses within a coherent framework is key to developing better predictions of temperature effects on natural populations.

Cite this recommendation as:
Inês Fragata and Pedro Simões (2022) The other side of the evolution of heat tolerance: correlated responses in metabolism and life-history traits. Peer Community in Evolutionary Biology, 100155. https://doi.org/10.24072/pci.evolbiol.100155
Conflict of interest:
The recommender in charge of the evaluation of the article and the reviewers declared that they have no conflict of interest (as defined in the code of conduct of PCI) with the authors or with the content of the article.

We thank the authors for the detailed revision of the first version of the paper.
The reviewer has some few more comments that should be addressed, but we are happy to write a recommendation once the authors incorporate the final suggestions from the reviewer.

The authors have done a good job of editing, revising and placing their work in a much broader context. Thank you. I have read the revised manuscript here and have made some suggestions that are not exhaustive. Please check them and revise them accordingly. The line numbers mentioned here are for the v2 document:

L229- change: better to call accumulated fecundity as total fecundity? I will leave the decision to you? One reads better than the other and makes more biological sense.

L340- change- is a conspicuous environmental to important abiotic variable that....

L345- change to- However the evolution of heat tolerance was not associated...

L354- delete on the other hand, and change to- "In line with our findings reported here,"

L358-359 - which would difficult the detection of change to: would be diffucult to detect metabolic changes under.....

L360- change to- A possible explanation could be that, our control and.....

L361- change: which could hide to "which could override correlated responses"

L377- agree with= is concordant

L392-393- A bit confused here: "the higher fecundity might be linked to their physiology as heat can drive higher offspring production, but it does not mean that greater numbers = higher quality? So, greater fecundity might not be better quality per se? Like you hint in lines 396-397 that fast-ramping individuals did not differ in egg to adult survival from the controls?" Can you clarify this or I could have mis-understood something!

L393- delete we can observe; change to: observing

L394- change: this difference was not significantly different to 'was not statistically significant'

Thank you for the opportunity to submit a revised version of our manuscript entitled “Evolutionary responses of energy metabolism, development, and reproduction to artificial selection for increasing heat tolerance in Drosophila subobscura”. Below you will find a detailed list of the actions we have taken to improve the manuscript following the suggestions from the editors and reviewers.

We hope the manuscript will now clarify all of their comments. Each comment is in Calabri bold followed by our reply in italic text. Additionally, we have made some changes in the text for a better explanation of our work.

Thank you for submitting your study for recommendation in PCI Evol Biol. This is a very interesting paper on a quite relevant topic, the evolution of heat tolerance and correlated responses in metabolism and other relevant traits. A deeper understanding of the evolution of thermal responses is a fundamental question in the evolutionary biology of the XXI century. We have asked two reviewers to comment on your manuscript, that you can find attached below. While both are positive about the study, they ask for several revisions the most important of which include a better framing of the study within the existent literature, a re-structuring of the discussion as well as some relevant clarifications about the methodology used. Considering those comments, and well as our own assessment of the manuscript, we encourage you to resubmit a revised version of your manuscript considering the points raised by the reviewers. Below we also highlight some points that need addressing:

· The introduction is lacking focus and is somewhat repetitive. While the literature on the topic appears to be well covered, it is hard to reconcile it in a coherent story, as it does not have a clear flow. For instance, there are several studies that are cited repeatedly in different paragraphs of the introduction, with apparently redundant purposes. Streamlining the reasoning throughout the introduction will also help in better framing the hypotheses and expectations presented in the end of the introduction.
· The discussion is too long and redundant in several places. The findings of the study must be better synthetized and framed within the literature to convey a clearer overall message to the reader. This is also a point raised by reviewer 2. Our assessment is that this task will be facilitated by providing a better focus of the study in the introduction (see first comment above).
· Carefully consider the comments / questions of reviewer 1 about the methodology used. Providing a supplementary figure with a scheme of the traits and generations analysed will also allow a better overall understanding of the study.
· Carefully revise the language of the manuscript as sometimes the wording is odd, and some sentences are not fully formed.

Line 29 – “ Evolution of stress resistance is companied with a metabolic depression”. This is a very bold statement, as there are several experimental studies that do not support such claim some of which you cite in the manuscript (e.g. Djawdan et al 1997, Mallard et al 2018).

Lines 82-84 – Why “on the other hand”? the Padfield et al 2016 study appears to corroborate previous findings reported above. It makes more sense to cite studies that present contrasting results such as Djawdan et al 1997, Mallard et al 2018 that do not find such reduction in metabolism.

Lines 113-117. Please explain better this reasoning, it looks too speculative. For example, in the Porcelli et al (2017) study the reduction of performance in reproductive traits was a consequence of direct exposure to heat stress, and no evidence was provided for an increased heat resistance.
Lines 358-359 – this is a direct effect of temperature on enzyme activity. It is important to clarify that examples stated below represent an evolutionary response rather than a direct, plastic response.
Line 382 – This recent paper appears to be relevant in this context : Tüzün N, Stoks R. 2022 A
fast pace-of-life is traded off against a high thermal performance. Proc. R. Soc. B 289:20212414 https://doi.org/10.1098/rspb.2021.2414
Lines 412-413 – this response is likely dependent on the environmental challenges imposed. Also in D. subobscura, Santos et al (2022) https://doi.org/10.1111/evo.14366  found no short-term adaptive response in populations evolving under a warming environment.