Alejandro Gonzalez Voyer based on reviews by Joaquin Calatayud and Thomas Guillerme
A recommendation of: 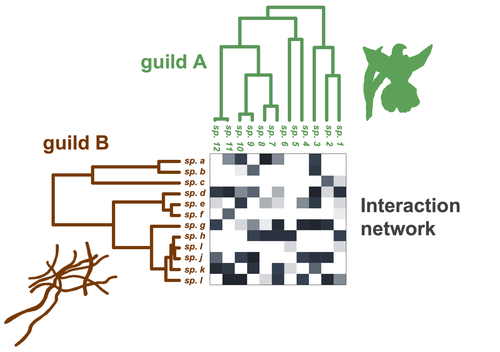 Whether interactions between species are conserved on evolutionary time-scales has spurred the development of both correlative and process-based approaches for testing phylogenetic signal in interspecific interactions: do closely related species interact with similar partners? Here we use simulations to test the statistical performances of the two approaches that are the most widely used in the field: Mantel tests and the Phylogenetic Bipartite Linear Model (PBLM). Mantel tests investigate the correlation between phylogenetic distances and dissimilarities in sets of interacting partners, while PBLM is a process-based approach that relies on strong assumptions about how interactions evolve. We find that PBLM often detects a phylogenetic signal when it should not. Simple Mantel tests instead have infrequent false positives and moderate statistical power; however, they often artifactually detect that closely related species interact with dissimilar partners. Partial Mantel tests, which are used to partial out the phylogenetic signal in the number of partners, actually fail at correcting for this confounding effect, and we instead recommend evaluating the significance of Mantel tests with network permutations constraining the number of partners. We also explore the ability of simple Mantel tests to analyze cladespecific phylogenetic signals. We provide general guidelines and an application on an interaction network between orchids and mycorrhizal fungi.

Cite this recommendation as:
Alejandro Gonzalez Voyer (2022) Testing for phylogenetic signal in species interaction networks. Peer Community in Evolutionary Biology, 100150. https://doi.org/10.24072/pci.evolbiol.100150
Conflict of interest:
The recommender in charge of the evaluation of the article and the reviewers declared that they have no conflict of interest (as defined in the code of conduct of PCI) with the authors or with the content of the article.

Version of the preprint: 4

I have now received comments from the two expert reviewers who previously provided comments on your preprint. Both are happy with how you addressed their previous comments and think the work is almost ready for recommendation. One reviewer raised to minor points which I think could be relatively easily addressed:

• l.162-184: Although the authors added a new figure that helps summarising the simulations (great job!), a table summarising the different parameters could still be useful (I still need to go back to the methods when reading the results part to find which parameter is which).

• l.431: I am still not sure why the authors used a 10 million arbitrary branch length, is this corresponding to some average speciation time in some other studies? Also on Figure 5, these politomies seem younger than 10 Mya.

I would ask you to address these two minor comments and I will make the final decision without sending the work out for review again.

I would end thanking you for considering PCI Evolutionary Biology for your work and also for the positive responses to the reviewer's comments.

The authors did an excellent job and I do not have further suggestions.

Version of the preprint: 3

I have read with interest the submitted preprint Do closely related species interact with similar partners? Testing for phylogenetic signal in bipartite interaction networks. I think the manuscript is well written and clearly presented in general. I think it could make for a valuable contribution to the field given the meticulous analyses of the perfomance of different metrics to test for phylogenetic signal in interaction networks. The two expert reviewers also agree that the work is well written and could be of interest to evolutionary biologists and evolutionary ecologists. The two reviewers have made a number of excellent suggestions on how to improve the work which should be addressed prior to recommendation. I have very little to add to the thorough reviews by both expert reviewers.

I look forward to receiving a revised version of your manuscript.

The manuscript is well written and the research is well conducted, timely and provides some interesting findings. I also appreciate the huge effort to conduct the large battery of simulations and analyses while keeping a congruent manuscript. I have, nevertheless, some conceptual and methodological considerations that may strengthen the research. It must be noted that I am more familiar with the Mantel test and my suggestions are focused in that direction.

2.       Effects of the number of interacting partners (and other generalism levels)

The authors proposed a sequential Mantel test to overcome confounding effects of phylogenetic signal in the number of interacting partners. They conducted a first Mantel test to explore the correlation between phylogenetic and ecological distances and a second one to explore the correlation between phylogenetic distances and differences in the number of interacting species. If both correlations were significant they treated the former as non-significant. While I agree that this approach may work in some situations, it will certainly produce type II errors when both composition and number of partners show phylogenetic signal, as they recognize in the discussion.

I think there are better alternatives to solve this issue than the sequential Mantel test. The root of the problem here is that both the Jaccard and the UniFrac distances take into account differences in taxonomic (i.e. number of species) and phylogenetic (i.e. sum of phylogenetic branch lengths) generalism, respectively. Hence, species with different levels of taxonomic or phylogenetic generalism will also show differences in interacting partner use when using these indices.  This is a common issue in many other situations, and there are well-stablished dissimilarity indices to overcome it (Baselga 2010, Leprieur et al. 2012, see also Calatayud et al. 2016 for their use in a similar context). By only taking into account dissimilarities due to true changes in the partner species/phylogenetic composition, these indices are robust to produce spurious correlations between ecological and phylogenetic distances when generalism levels show phylogenetic signal.

Alternatively (or even better complementarily), using appropriate randomization schedules to asses statistical significance in Mantel test can help to get rid of this confounding effect. That is, rather than permuting any of the distance matrices (as I guess the authors did), one can permute the raw interaction matrix by retaining some of its properties. For this case, it would be possible to randomise the interaction matrix keeping constant the number of interaction partners. While this does not affect observed correlation coefficients, it certainly reduces type I errors associated with phylogenetic signal in generalism levels, improving also other issues of Mantel test (Guillot & Rousset 2013). Note also, that randomizations of raw data can also accommodate other aspects such as unequal sampling effort or spatial patterns (e.g. Vázquez et al. 2009), making Mantel test highly flexible (perhaps this could also be discussed).

In summary, by using appropriate dissimilarity indices and null models it is possible to remove the effects of potential phylogenetic signals in generalism levels. To the best of my knowledge, this is where the state of the art is when using the Mantel test (or any of its updates, see, for example, Ferrier et al. 2007 for generalized regression on distance matrices). Still, the behaviour of these apparently and theoretically more advanced approaches has not been tested using simulated benchmarks.  I think the authors have the perfect opportunity to do this, which I believe would certainly improve the research. Though I encourage the author to test this approach, I am totally aware that it might imply a huge (perhaps unfeasible) effort. If this is the case, I would suggest to send the sections “Confounding effect of the phylogenetic signal in the number of partners” to supporting information, especially considering that your simulations should not produce phylogenetic signal in generalism. At the very least, I think the commented alternatives deserve a mention in the discussion, perhaps removing any recommendation to the sequential Mantel test.

I am just not sure whether the mantel test is not also a model-based approach as it implicitly assumes that ecological divergence increase with divergence time (Letten & Cornwell 2015). Indeed, phylogenetic distances used in Mantel test (or analogous) can be modified to accommodate different evolutionary models (e.g. Calatayud et al. 2019).  Of course, it is not as explicitly as other models, but I think this classification might be controversial. Just not sure.

Other potential missing references for the introduction:

Baselga, A. 2010. Partitioning the turnover and nestedness components of beta diversity. Global Ecology and Biogeography 19:134-143